The Importance of Sleep and Weight Loss

Sleep deprivation leads to chronic health issues including hypertension and weight gain. Unfortunately, more Americans are getting less than six hours each night and suffering the consequences.

John, 4 years post-op Gastric Bypass, appreciates the value of sleep and weight loss after spending eight years with Obstructive Sleep Apnea and three years with a CPAP machine.  “The night before surgery was my last night with the CPAP.  Although I was suffering with hypertension too, the lack of sleep was the biggest impact on my life.”

According to the National Sleep Foundation, “An estimated 18 million Americans have sleep apnea.  As the person gains weight, the risk of sleep-disordered breathing increases due to compromised respiratory function…If a person is overweight and suffering from sleep-disordered breathing, he/she may not be as motivated to exercise or to diet. When apnea leads to daytime sleepiness, it may be that much harder to begin or sustain an exercise program.  Not only does obesity contribute to sleep problems such as sleep apnea, but sleep problems can also contribute to obesity.”

“It was a vicious cycle,” John declares.  “I would get up in the morning still tired and drink a pot of coffee by lunch.  At work I was always grabbing some kind of snack just to get through the day, and I didn’t care what the calories were. Driving home was rough.  My routine was  talking on the phone with my wife just so I could stay awake.  I couldn’t even think about exercise then.”

Harvard School of Public Health lists five ways that sleep deprivation can increase how much food people eat and decrease how many calories they burn.  The importance of sleep and weight loss. 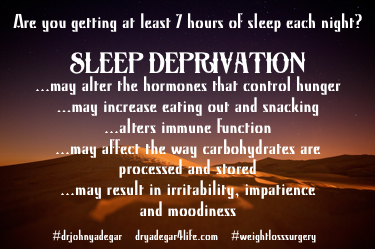 Sleep deprivation may alter the hormones that control hunger.

People who sleep less each night may eat more than people who get a full night’s sleep simply because they have more waking time available.

One study did find that workers who slept fewer than six hours a night were more likely to eat out, have irregular meal patterns, and snack than those who slept more than six hours.

People who are sleep-deprived tend to see a drop in their body temperatures. This drop, in turn, may lead to decreased energy expenditure.

“About two weeks after surgery I was already sleeping better,” reports John.  “I was so grateful that I immediately made the decision to commit to getting really healthy, and this included getting plenty of sleep every night.  I feel my best at 7.5 hours, although sometimes it’s a little less and on the weekends it’s a little more.  But I make sleep a priority.  I was without it for so long, now it’s a commodity I won’t do without.”

1. Learning and memory:  Sleep helps the brain commit new information to memory through a process called memory consolidation. In studies, people who’d slept after learning a task did better on tests later.

2. Metabolism and weight:  Chronic sleep deprivation may cause weight gain by affecting the way our bodies process and store carbohydrates, and by altering levels of hormones that affect our appetite.

3. Safety: Sleep debt contributes to a greater tendency to fall asleep during the daytime. These lapses may cause falls and mistakes such as medical errors, air traffic mishaps, and road accidents.

4. Mood:  Sleep loss may result in irritability, impatience, inability to concentrate, and moodiness. Too little sleep can also leave you too tired to do the things you like to do.

6. Disease:  Sleep deprivation alters immune function, including the activity of the body’s killer cells. Keeping up with sleep may also help fight cancer.

After four years, John has maintained his weight loss.  “I lost 118 pounds in 14 months.  My hypertension and sleep apnea were resolved in less time and they have not come back.  I won’t let them.  Yes, I pay attention to what I eat, I exercise, I take my vitamins and I sleep.  Life is entirely different.  This is how I live now.”

1. Stick to a sleep schedule.

2. Pay attention to what you eat and drink.

6. Include physical activity in your daily routine.